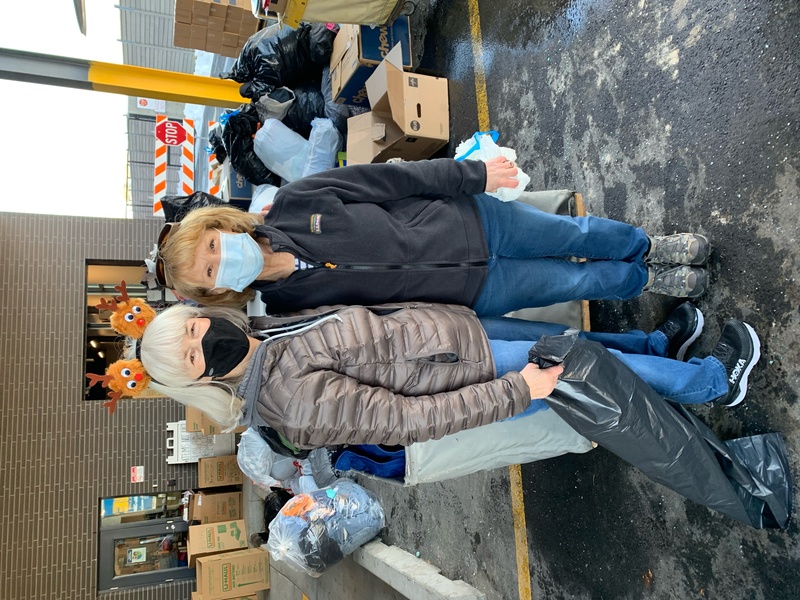 Finding and Being An Elizabeth (or a Zechariah)

Friday morning Julia and I got a text from our daughter, Hannah, who is 28 and lives in Puyallup, Washington. It was about 6 am, Hannah was coming out of her early morning yoga class, and she heard one of her tires hissing. She noticed a screw in her tire and texted, “What do I do?” It turned out that a friend from her yoga class followed her 400’ down the road, where there was a Les Schwab tire store. Hannah parked her truck there, and went back to the yoga studio and waited until 8 am, when Les Schwab opened. She contacted her co-teacher and told her she was going to be a little late to school. And her tire got fixed for free. Later on, Julia chatted with Hannah and she said, “Right after I texted you about “What am I going to do?” I said to myself, “I am going to figure this out!”

SITUATION - The angel Gabriel had been busy

The angel Gabriel had been busy.

One day he appeared to Zechariah when he was doing his priestly duties at the altar of the Lord, and announced that Zechariah’s wife, Elizabeth, who, along with Zechariah, was “getting on in years,” would give birth to a son who would turn many of the people of Israel back to the Lord, as he prepared the way for the Messiah. They were to name this son John, and John would be filled with the Holy Spirt before he was even born.

Elizabeth did indeed become pregnant, and in the sixth month of her pregnancy, Gabriel made another visit, this time to a virgin in Nazareth named Mary, who was engaged to a man named Joseph. Gabriel explained that Mary had found favor with God, that she would conceive and bear a son, and that she would name him Jesus. This son would be called the Son of the Most High, who would reign over the house of Jacob forever, and have an eternal kingdom. Mary asked the most logical question - “How can this be, since I am a virgin?”

And Gabriel explained that the Holy Spirt would come upon her, and the power of the Most High would overshadow her, that the one to be born would be holy and called Son of God, and that - by the way - her relative Elizabeth had conceived in her old age and was now in the sixth month of her pregnancy, and - just so you know, Mary - “nothing will be impossible with God.” (Luke 1:37)

At which point Mary said, “Word! Let’s do this thing!”

Actually: “Here am I, the servant of the Lord; let it be with me according to your word.” (Luke 1:38) And Gabriel thought to himself, “Wow, I thought I was going to have to do more convincing than this! God obviously sent me to the right teenager!”

And Gabriel went back to the throne of God, or wherever angels hang out on their days off.

And then what happened?  Well… it would seem that Mary remembered what Gabriel had said about her relative, Elizabeth, being pregnant, because the very next thing Luke tells us is that Mary went “with haste” to a Judean town in the hill country, entered the house of Zechariah and Elizabeth, and greeted Elizabeth.

You heard that part of the story a moment ago. Before Mary could say anything else, Elizabeth told her that at her greeting, the yet-to-be-born John leaped in her womb, and Elizabeth was filled with the Holy Spirit. (The Holy Spirit was evidently just as busy as Gabriel!)  Luke suggests that it was by a revelation of the Spirit that Elizabeth apprehended that her relative, Mary, was pregnant with the Lord… the Messiah. And she said, “And why has this happened to me, that the mother of my Lord comes to me?“ (Luke 1:43)

And after Mary’s praising of God, which you and I know as The Magnificat, there is one more line:

“And Mary remained with her [that is, Elizabeth] about three months and then returned to her home.” (Luke 1:56)

When God calls, and we are pretty sure that it is God calling us, and we say ‘yes’, that is a pretty special thing! And for most of us, I think there usually comes a moment when we say, “Wait… what? Did that really happen? Did I just say yes… to God? What have I done?”

Don’t you imagine this happened for Mary? And don’t you think she maybe had a moment when she thought, “I am alone in this! What am I going to tell Joseph? He is not going to get this - at all! Neither will my parents. And the people in our town? They are going to have a field day with this… with me!”

Mary - a teenager, mind you - did a very vulnerable and a very wise thing right then. She went to see her relative Elizabeth. I don’t think, after walking however far that was, that she was thinking she would spend one night with Elizabeth and head back home.

And Mary received the exact welcome that she needed from Elizabeth. Heidi said on Thursday, “Elizabeth recognized the miracle in Mary where others did not. She could hang out with someone who understood!” Leo said, “Elizabeth was giving strength to Mary, and comfort and confidence. Elizabeth held her up!” Julia added, “Mary probably needed the three months to be nurtured and supported.” Linda chimed in: I see Elizabeth as offering total acceptance, and not being judgmental at all. Deborah said, “I don’t know how I would have done what Mary was about to do. Thankfully she had Elizabeth. They could discuss what was ahead and share their perspectives with each other.

Mary and Elizabeth had their own 3-month-long Advent, as they waited together - as Elizabeth got closer and closer to delivering John.

I think Luke mentioned that they were together for three months so that we would mull that over a bit. What do you suppose they talked about? They must have shared with each other about Zechariah’s visit from Gabriel and Mary’s visit from Gabriel! Don’t you see them chopping vegetables together… baking bread together… cooking together? Don’t you see Elizabeth and Mary strategizing together about how Mary could talk to Joseph about all that had happened, and probably how to to talk to her parents, too? Can’t you see Zechariah joining in some of those conversations, writing on a tablet since he had been struck mute? Can’t you see them taking short walks to the market together, and also just being quiet together, not having to say anything… just silently giving thanks that they had each other?

There is plenty of good news in the stories of Elizabeth and Mary.

Part of the good news is that you are never too old or too young for God to come calling, for God to have a mission in mind for you.

The next piece of good news is that God provides the Elizabeths - or the Zechariahs - that we need in our lives… at just the right time!

You know, it is one thing to have an encounter with an angel (I can’t say that has happened to me) or to hear a word from God, but sometimes what we most need is a flesh and blood human being who we can talk to, lean on, share our feelings with, share our questions with, and simply be with!

God does not just leave Elizabeth and Mary to their own devices when these miracles - with their upcoming challenges - are announced. No! He gives them each other, in the very same way that God gives us each other.

Elizabeth Fetter - it was so great to have an Elizabeth among us on Thursday! - said, “Mary and Elizabeth had each other and the Divine. All of us go through things that are more or less unique… and we can all be Elizabeth to someone.

My wife shared with the Lectio group on Thursday, “You all have been Elizabeths to me!”

Friends, there is a lot of emphasis in our culture about going it alone… toughing it out… all kinds of people urging us to not be vulnerable… to NOT ask for help. I’m talking to all of you right now, but you men out there… I am especially talking to you!

God is calling each one of us to break through this culture conditioning and find the Elizabeths and the Zechariahs that you need - those who can walk with you on the journey, those who can just sit with you and listen, and yes, those you can lean on when you need someone to lean on.

Learn how to call on your Elizabeths and your Zechariahs… whenever you need them.

Being a Christian was never intended to be a lone wolf kind of faith. From the very beginning, Jesus sent the disciples out two by two, and when they wren’t a twosome, there were often a group of 13. (And I think Jesus was pretty smart.)

Hannah figured it out on Friday morning. Part of what she figured out is that she could ask for help. And when she did that, she found her Elizabeths - just like that!

Just don’t forget that you get to call on your Elizabeth or your Zechariah - whenever you need them.